“Why do we have to die for a territory that is ours?” 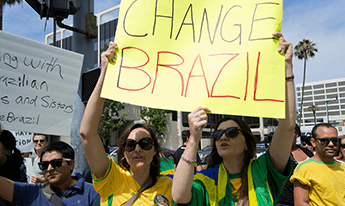 The Guarani-Kaiowa indigenous peoples in Mato Grosso do Sul do not let their guard down in their struggle to obtain recognition and territorial demarcation of their ancestral lands.

In the Brazil of scandals and corrupt politicians, the landed oligarchy has taken over and is dismantling the judicial apparatus that had given recognition to the rights of the indigenous populations, beginning with land rights.

The incidents involving the Guarani-Kaiowa peoples from the state of Mato Grosso do Sul, in the southwestern area of the country, are only a few of the many possible examples.

Eight indigenous reserves were created in Mato Grosso do Sul between 1915 and 1928 that covered a total of 17,975 Ha. The most important (and also more problematic) of these reserves is Dourados, established in 1917. Dourados covers 3,600 Ha that are now home to15,000 inhabitants belonging to two ethnic groups (Guaraní and Terena).

The total area encompassing these eight reserves is minimal compared to any of the dozens of farms for sale at the moment in that state. For instance, in a random pick of three estates from a quick internet search we found that their areas cover 22,410, 28,000 and 41,000 Ha, all of which include the enormous houses of the owners,  baryards with cows and horses, huge grazing areas or monoculture plantations, roads and streams or ponds.

According to the Indigenous Peoples of Brazil Program, run by the nongovernmental Socio-Environmental Institute (ISA), “from 1920 on, and more intensively  since 1960, started a systematic and effective colonization of the Guarani territories, giving start to a methodic process of expropriation of their lands by the white settlers”. With the creation of indigenous peoples reserves by the then Indian Protection Service (SPI)  in Mato Grosso do Sul, the thinking spread that the estates occupied by white colonizers and claimed by the indigenous peoples had never belonged to the latter, as the true lands belonging to the indigenous peoples were the reserves.

Mato Grosso do Sul is a clear example of the criminalization project against the indigenous peoples and their allies, started in the last few years by the owners, the dominant political establishment, and the mass media. Data from August 2016 coming from the Indigenous Missionary Council (CIMI), part of the Catholic Church, indicate that besides the reserves, there are 96 indigenous territories in Mato Grosso do Sul, but in reality the indigenous peoples live confined in reserves or small plots of land, when they are not settled along highways. Tired of waiting for their rights to be heard, many groups have taken their own initiatives with the so called “retaking”, or the recovery or reconquest of their lands.

Murders and suicides
Against the indigenous resistance and initiative, violence and hate towards these peoples have increased. There have now been dozens of attacks perpetrated by paramilitary squads paid by big landowners and in complicity with authorities. According to the CIMI, 426 indigenous people were killed in Mato Grosso do Sul between 2003 and 2015, 36 in 2015 alone. And in places where direct violence has not reached yet, suicides have: 752 occurred between 2000 and2015, with 45 in 2015 alone.

The CIMI has experienced first-hand what it means to fight for indigenous rights and against the system that denies them. The Legislative Assembly of  Mato Grosso do Sul created a Parliamentary Investigative Commission (CPI) in 2015 to bring charges against the CIMI, including their main representatives, President Msgr. Roque Paloschi and the Executive Secretary Cleber César Buzatto.

In the 222 pages of the final report from the CPI on the CIMI, presented in May 2016, the words are strong: “It causes indignation, bewilderment and revulsion the fact that an entity linked to the Catholic Church has caused so much harm”, and also that there are strong indications of the “participation of the CIMI in inciting violence and the invasion of public property” by indigenous people.

Large landowners and politicians have not stopped there; they also have replicated the strategy in the federal Chamber of Deputies, by creating an investigative commission on two governmental entities, the National Indian Foundation (FUNAI) and the National Institute of Colonization and Agrarian Reform (INCRA), asking that a judicial process be brought against dozens of native leaders and anthropologists that defend the demarcation of indigenous territories.

The offensive taken against the indigenous people by the government of President Michel Temer seems unstoppable.  Army General Franklimberg Ribeiro de Freitas was named head of  FUNAI on May 9. The Articulation of Indigenous Peoples of Brazil (APIB),  which brings together organizations defenders of the rights of indigenous populations, has denounced an unacceptable militarization of the governmental organization with the aim of expanding the agricultural borders and business projects into indigenous lands. These lands run the risk of  being redimensioned or eliminated if the  proposed amendment Nº 215 to the Constitution presented in 2012 is approved, which seeks to transfer the  prerogative to delimit the indigenous territories to the National Congress, transforming a native right into a mere object of negotiation.

Demarcation just on paper
Ládio Veron (Ava Taperendi in indigenous language), a 50 year-old school teacher is a Chief of the Guaraní-Kaiowá community of the Takuara indigenous territory, in the municipality of Juti, which covers an area of 9,700 Ha. In some areas it overlaps agricultural farms, in particular with the Brasília do Sul estate dedicated mainly to soy production.

Between January 11 and 13, 2003, hacienda owner Jacinto Honório da Silva and some of his workers stormed Takuara. Later, a group of hired guns arrived and attacked the community. Chief Marcos Veron, 72, was involved in the fight that ensued and later died in the hospital as a consequence of serious injuries. Marcos was the father of Ládio, who in the fight for territorial rights also lost some of his brothers and other relatives. “Why do we have to die for a territory that is ours?,” he questions.

After years of demands and occupations, Takuara today has gotten over the long and complex process of juridical recognition and is, for all intents and purposes, an indigenous property territory. However, it has not yet been given back. On the contrary, the judges of  Mato Grosso do Sul constantly issue eviction notices. “The FUNAI does not have the power to proceed with the demarcation of our territories. We ask for a change. We ask to have some of our representatives in it. We have indigenous people who are prepared to do this,” Veron explains.

“We are some 70 families in Takuara who occupy no more than 90 Ha of territory”, he says. “But we have to tolerate that hundreds of trucks loaded with soybean pass through our village”.

The prevalent feeling towards the indigenous populations is recalled by missionary Egon Heck: “The claim made by former Governor (of Mato Grosso do Sul) André Puccinelli (2007-2014) that ‘it is a crime to provide a span of productive land to the natives’ is revealing.”

The powerful Federation of Agriculture and Livestock of Mato Grosso do Sul State (FAMASUL) is accused of promoting the use of armed militia against the indigenous communities in the state.

The consensus among big rural producers and the politicians who represent them is that agribusiness and development cannot stop because of territorial claims from indigenous populations and, even less so, because of the indigenous worldvision, considered to be a group of abstract or implausible concepts. It does not matter if these rights are embodied in the Constitution of 1988 and if agribusiness enriches a small minority and destroys the common good as is the natural environment.