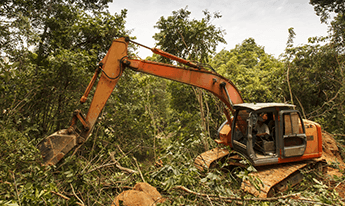 The deforestation of the Atlantic Forest, Brazil’ssecond most important forest, grew 57.7% in a year, from 2015 to 2016, when the biome lost 29,075 hectares, or 29 thousand football fields. Figures were released Monday (May 29) by the SOS Mata Atlântica Foundation and the National Institute for Space Research (INPE).

In the previous period (2014-2015), the area cleared had totaled 18,433 hectares. According to SOS Mata Atlântica Executive Director Marcia Hirota, the forest, which has spread across 17 states for ten years, had not seen such high levels of deforestation. “What strikes us the most is the considerable increase in deforestation during the period. It’s a huge setback, with rates comparable to those of 2005,” she said. From 2005 to 2008, the Atlantic Forest lost 102,938 hectares—a yearly average of 34,313 hectares.

Deforestation in the states

From 2015 to 2016, Bahia was the state most severely hit by deforestation—12,288 hectares cleared, 207% higher than the previous 3,997 hectares of native vegetation devastated. The Bahia municipalities of Santa Cruz Cabrália and Belmonte head the list with the top deforesters, with 3,058 hectares and 2,11 hectares respectively. Deforestation rates from other cities in southern Bahia considered, like Porto Seguro and Ilhéus, some 30% of the biome was destroyed during the period in the region.

“This is Brazil’s richest region for biodiversity, with great potential for tourism. We’re destroying heritage that could generate development, employment, and income for the state,” Hirota argued.

The state of Minas Gerais ranks second, with 7,410 hectares deforested, most of which in the north—an area known for the devastation of its native vegetation for the production of coal and the growing of eucalyptus.

According to Mario Mantovani, the foundation’s director for public policies, the scenario is bleak and shows a major reversal in the downward trend in deforestation observed in the last few years.

“The productive sector is once again gaining on our forests—not just the Atlantic Forest, but also in all biomes, after the changes in the Forest Code and the subsequent dismantling of Brazil’senvironmental legislation. It may be the beginning of a new phase in the growth of deforestation, which we cannot accept.”