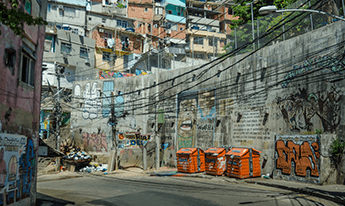 Soldiers from the National Force reinforced the security in Rio de Janeiro, chiefly in areas with heavier truck traffic on Avenida Brasil and the entries to the Chapadão favela complex—where vehicles and cargoes are stolen at alarming rates. The operation started Monday (May 15).

Near the entry to a hill known as Morro da Pedreira, one of the city’s most violent districts, the security agents set up checkpoints to inspect personal and vehicle documents. Drivers had to get off their trucks and show what they were carrying.

The National Force was sent to Rio last Tuesday (9), after state Governor Luiz Fernando Pezão asked for the support of the federal government in fighting the city’s appalling violence rates. The request came following an attempted invasion of a gang in Cidade Alta, Cordovil, northern Rio de Janeiro, on May 2. Ten buses and two trucks were set on fire, which brought the traffic on Avenida Brazil—the main thoroughfare into Rio—to a halt.

Altogether, 300 men were deployed. The agents joined the 125 who had been in the city since Feburary providing extra patrolling support after the protests against the voting of unpopular measures at the Rio de Janeiro City Council (ALERJ). Federal Highway Police officers will also be sent to the city, but no date has been set for their arrival thus far.