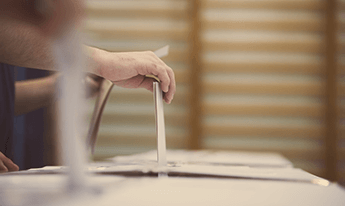 Barely 23 percent of the electorate turned out to vote to decide on independence, statehood, or to remain a US commonwealth.

Some 500,000 citizens, of the 2.2 million who registered, voted in the non-binding referendum on the legal status of Puerto Rico on June 11. The ballot, titled “Plebiscite for the immediate decolonization of Puerto Rico,” offered the options of Statehood (to become the 51st state of the United States), Free Association/Independence, and Current Territorial Status (Commonwealth).

The statehood option, or annexation, was chosen by 97.2 percent of the voters, according to the State Elections Commission, while independence received 1.5 percent of the vote, and to maintain a commonwealth status got 1.3 percent.

Governor Ricardo Rosselló, in favor of statehood, said that the results are a call to “put an end to a colonial relationship with the United States.”

“It is on us now to take the results to Washington with the force represented by the observance of a democratic process,” he said.

Although Rosselló considered the voting a triumph, according to the opposition it was a defeat taking into account the low turnout of the population.

Héctor Ferrer, president of the Popular Democratic Party (PPD), in favor of maintaining the Commonwealth status, said that the voters “went out, went to the beach, to the river. They did not pay attention [to the call to vote]. The real losers were statehood and Rosselló.”

For María de Lourdes Santiago, vice-president of the Puerto Rican Independence Party, the referendum was “a resounding failure for the colonial option.”

Although the media highlighted the victory of statehood, the truth is that after having been voted on by a low number of the electorate and because of its non-binding nature, it could suffer the same fate as the previous referendums in which this same option came on top, and was met with the indifference of the US Congress, responsible for providing the final approval.

Unpayable debt
The voting took place a few weeks after Rosselló declared the island in bankrupt in order to restructure the debt that totals US$74 billion and that represents 70 percent of its gross domestic product.

In 2015 Puerto Rico declared moratorium on their debt. Then Governor Alejandro García Padilla (2013-2017) admitted that “the public debt, considering the level of current economic activity, is unpayable.  But also, the amount of the debt prevents us from coming out of the cycle of recession and shrinkage.”

Puerto Rico, as a commonwealth, does not enjoy the same benefits as the other states of the United States, such as declaring themselves in bankrupt and obtaining legal protection from their creditors and allowing them to restructure their debts. Puerto Rico cannot take unilateral decisions; it can only use the merchant marine to transport products to and from the island; and it cannot establish bilateral relations with other countries.

Former President Barack Obama (2009-2017) signed the Puerto Rico Oversight Management and Economic Stability Act or PROMESA Law on June 30, 2016, providing the legal framework for the island to achieve fiscal responsibility and access to the capital market.

However, agreements were not reached with creditors and on May 3, Rosselló invoked Title III included in the PROMESA Law, which allows for the restructuring of the debt with protective measures similar to those made available to other US states, such as declaring bankruptcy, stopping lawsuits, and letting the courts make decisions regarding the payments.

“After lengthy goodwill conversations and the opening by the government of Puerto Rico of their financial books and records to creditors, there has not been enough progress in negotiations so Title III of the PROMESA Law makes it possible to present to a special court the restructuring of the public debt of Puerto Rico,” the governor said.

Currently, 45 percent of the 3.5 million island population is living in poverty and the unemployment rate has reached 12 percent, twice the US average, and in addition to this, there is an increasing exodus of qualified workforce to other US territories. —Latinamerica Press.