From Success to Significance 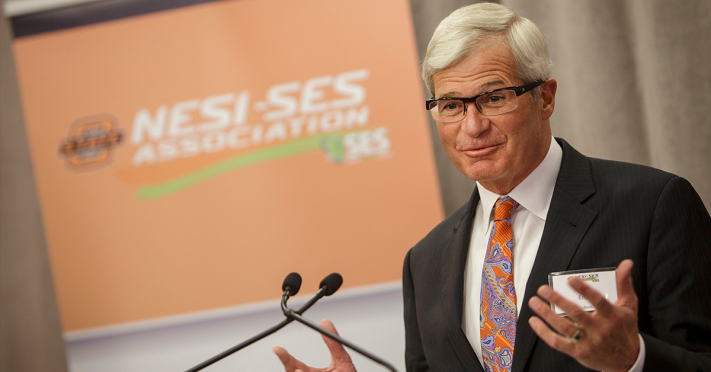 In the year 2000, when Bob Engel made the decision to join Denver-based CoBank after serving as chief banking officer at HSBC Bank USA in New York, a lot of professional colleagues told him he was crazy.

After all, HSBC was one of the world’s largest, strongest and most prestigious financial institutions, with over a trillion dollars in assets and operations all over the world. CoBank, meanwhile, was an obscure B2B lender focused on the agribusiness and rural utilities sectors. With only a little over $20 billion in assets, it was short on both capital and earnings, to the point where it was regularly selling off loans in order to stay in compliance with regulatory capital requirements.

But Engel saw a diamond in the rough – one with a lot of unique positive attributes and potential. One plus was CoBank’s cooperative ownership structure, through which borrowers built equity in the bank over time in proportion to the amount of business they did. Another was its mission: CoBank was focused exclusively on serving industries that are essential to the U.S. rural economy. Yet another was its board of directors, composed mainly of farmers, ranchers and executives of rural businesses from around the country who cared more about keeping the bank relevant and valuable for the next generation of customerowners than quarterly earnings.

“I often say that rural America is one of the country’s most under-appreciated assets,” Engel recalled. “It is where the vast majority of the food we eat comes from and an increasingly large share of our energy as well. I was passionate about coming to work for a bank that had a higher purpose, one that would support our customers in all market conditions – to enhance the quality of life for all Americans.” Fast forward to 2016, and Engel says he has never once regretted his decision.

Since Engel signed on, first as President & Chief Operating Officer and then as CEO beginning in 2006, the bank has recorded 16 consecutive years of record profits. In 2015 the bank generated $937 million in net income, despite having only about 900 employees. (On a per-employee basis, that was five times more profitable than Goldman Sachs.) The bank has also grown substantially, to over $120 billion in assets, and is now one of the nation’s top commercial/industrial lenders.

“It has been extremely gratifying to see this bank reach its full potential,” Engel said. “I’d love to tell you there is a secret sauce that I brought to the table. But we have achieved success simply by focusing on having people that believe in our mission and on delivering exceptional value to customers. I constantly remind people here that our job is to know more and care more about our customers than any other financial institution. By and large we’ve been able to do that, and the financial performance of the bank has pretty much taken care of itself.”

Engel, who is stepping down from the CEO role at the end of 2016, takes genuine pride in the fact that CoBank is “an old-fashioned relationship lender.” While many commercial banks focus on generating fee income from deals and then sell off the loans they make in the secondary market, CoBank likes to keep as much as is prudent of its loans on its own balance sheet. Its goal is to build long-term customer relationships that will last years and even decades.

That approach is well-suited to CoBank’s customer base, which includes farmer-owned cooperatives and rural power, water and communications service providers in all 50 states. The bank is also a wholesale lender to 24 Farm Credit associations around the country – essentially memberowned credit unions that serve over 75,000 farmers, ranchers and other rural borrowers. Wellknown businesses that borrow from CoBank include Blue Diamond, CHS, Ocean Spray, Land O’Lakes, Sun Maid and Dairy Farmers of America.

“Our customers operate in capital-intensive industries,” Engel said. “They want a lender who not only has the capacity to meet their borrowing needs but who will be with them for the long term. Many commercial banks have a tendency to be fairweather friends; they will pull out of an industry at the drop of a hat if conditions get tough. Our board would never let us do that. CoBank is specifically chartered to serve rural America, in good times and bad.”

CoBank is the largest institution in the Farm Credit System, a GSE established by the federal government in the early 1900s in order to ensure that farmers and other rural borrowers had dependable access to credit and financial services. The System has since grown to over $300 billion in assets and accounts for approximately 40 percent of all farm lending. In 2016, the System celebrated its 100th anniversary, which included special proclamations from President Barack Obama and the U.S. Congress.

“Very few business enterprises have the staying power to last for a century,” Engel said. “They get acquired, go out of business or become obsolete because of
technological or market change. But Farm Credit has survived and thrived by remaining true to its essential characteristics and principles, including cooperative ownership and an exclusive focus on rural America.”

At CoBank, one major endeavor for Engel in recent years has been building a vibrant corporate social responsibility program, which he sees as an extension of the bank’s broader mission of service to rural America. As one component of that program, Engel was able to garner support from the CoBank board to begin targeting 1 percent of CoBank’s budgeted net income for contributions to charitable organizations. That meant approximately $9 million in 2016, making CoBank one of the largest corporate donors in the state of Colorado.

“One of the great things about the financial success we have had is that it enables us to be a good corporate citizen,” Engel said. “Our margins have allowed us to further support our mission. And we have been able to give back to the community in a significant way, not only in Denver but in rural communities all over the country.”

One of CoBank’s signature programs is called “Sharing Success,” an annual $3 million fund that matches charitable contributions made by customers around the country. Through the program the bank funds everything from playground renovations at local schools to vehicle purchases on behalf of rural volunteer fire departments. In partnership with a local electric cooperative, the bank even funded the purchase of a digital movie projector at a small-town movie theater in the Midwest that would have closed without the new equipment.

“I’m a huge believer in the power of partnerships,” Engel said. “Our customers know much better than we do what the needs are in their local communities. By working hand-in-hand with them we are far more effective in terms of having a positive impact.”

CoBank is also a major contributor to local causes in Denver and the surrounding area. In 2012, the bank contributed $2.5 million in support of a new commodities center at the University of Colorado-Denver Business School. The bank has also been a major contributor to Colorado State University, Food Bank of the Rockies, Young Americans Financial Center, American Red Cross, Children’s Hospital Colorado, and Mile High United Way. In addition, the bank allows each employee to direct a $500 contribution from the bank each year to a charity of his or her choice.

“Our employees love that benefit,” Engel said. “Increasingly, our associates tell us they care about the bank giving back to the community, and this program allows them to take part in that and experience it in a very tangible way. It has been a fantastic driver of employee engagement for us.”
Personally, Engel walks the talk when it comes to community service. He is a longtime trustee of his alma mater, Buffalobased Niagara University, and previously served on the board of Mile High United Way. He currently serves as chairman of the Regis University board of trustees.

Engel was recognized for those efforts with a “Corporate Citizen of the Year” award from the Denver Business Journal in November 2016.

“I have been very fortunate in terms of career success,” Engel said. “But I actually care a lot more about significance. The work I’ve been able to do during my years at CoBank, both in terms of supporting rural America and in giving back to the community, has been rewarding because it is significant. I am extremely proud of what we have accomplished together and believe the work we’ve done and the investments we’ve made will bear fruit for many years to come.