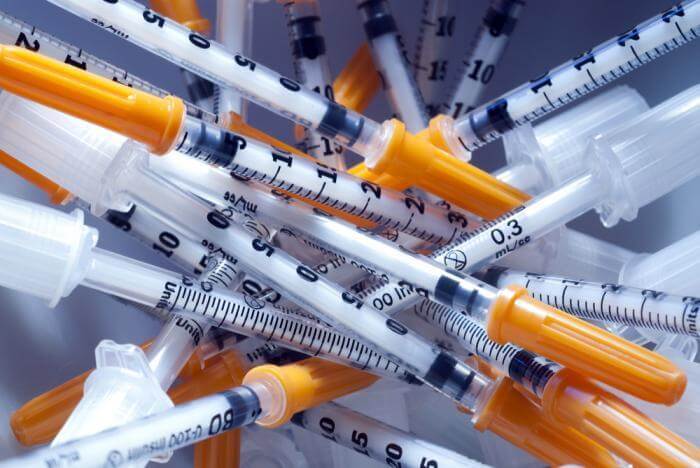 However partial lifting of decades-long ban still does not allow federal funds to directly purchase needles.

The AIDS Healthcare Foundation (AHF) has applauded Congress for partially lifting its longstanding ban on federal dollars being used to support needle exchange programs that have been proven to reduce the transmission of HIV and disease by allowing intravenous drug users to trade in used syringes for new, clean ones. Inserted as a provision in the omnibus spending bill signed by President Obama last month, the legislation, while still prohibiting federal dollars from directly purchasing syringes for needle exchanges, allows for federal funding to be used to support other costs related to these programs, including staff and educational outreach.

“We are pleased that concern for public health has trumped politics in this long-overdue move to allow federal funds to support needle exchange programs that have been studied and proven over the years to effectively prevent HIV, hepatitis and other infections among intravenous drug users,” said AHF President Michael Weinstein. “We must now work to get state and local governments to step up and pay for the clean syringes necessary to support these programs.”

The partial repeal of the ban—which was first enacted in 1988, lifted in 2009 and then reinstated in 2011—comes on the heels of a recent HIV and hepatitis C outbreak in southeastern Indiana that was linked to intravenous drug use. Efforts to end the ban were reportedly led by Appropriations Chairman Congressman Hal Rogers and backed by Senate Majority Leader Mitch McConnell, both Republicans from Kentucky, and Appropriations Committee member Senator Shelley Moore Capito (R-WV).

When news of a large HIV outbreak driven by intravenous drug use in Austin, Indiana surfaced last spring, AHF offered its support to City of Austin Mayor Douglas Campbell, Scott County, and the State of Indiana by sending one of its mobile testing vans to Austin to offer free HIV testing and counseling. In December, AHF held a dedication ceremony for its new AHF Healthcare Center/Austin and AHF Pharmacy that will offer state-of-the-art medical care and specialty pharmacy services to people living with HIV/AIDS and hepatitis C in Austin and Southern Indiana. Located at 25 West Main Street in conjunction with Foundations Family Medicine and led by Dr. William Cooke, the City of Austin’s only physician who now also serves as Medical Director of AHF’s Healthcare Center, both the AHF Healthcare Center and AHF Pharmacy operate Monday through Friday from 8:00 a.m. to 5:00 p.m.

According to the Centers for Disease Control and Prevention (CDC), 8% (3,900) of the estimated 47,500 new HIV infections in the United States in 2010 were attributed to injection drug use. AIDSWatch reported in 2014 that a 2005 CDC study found that the cost to prevent one HIV infection by syringe exchange programs (SEPs) has been calculated at $4,000–$12,000, considerably less than the estimated $379,668 lifetime costs of treating a person infected with HIV.